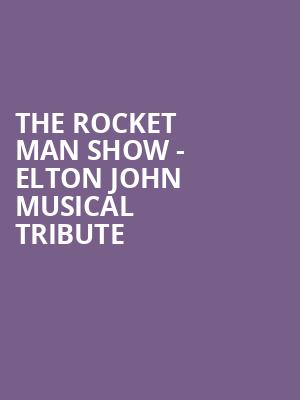 pICKED BY Elton jOHN HIMSELF

Prepare to blast off into the stratosphere with this electrifying tribute to The Rocketman himself! Starring Rus Anderson, enjoy one of the most detailed re-creations of Elton John's '70s shows - from uncanny vocals, staging and including some of the actual costumes from the flamboyant era. With a nostalgic setlist that'll take you right back to when rock was young, this is the perfect night out for Elton fans - old and new!

Currently, on his final world tour, Elton John is one of the world's most beloved showmen. First coming to prominence in the early '70s, he has gone on to become an international treasure. Be it his and Berne Taupin's fabulous tunes, a musical or a movie - he remains an entertainment phenomenon!

Photo by israel palacio on Unsplash

Sound good to you? Share this page on social media and let your friends know about The Rocket Man Show - Elton John Musical Tribute at Barbara B Mann Performing Arts Hall.